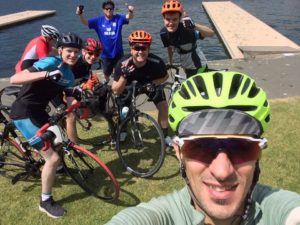 Two cars, 8 bikes, 5 young people,4 members of staff and plenty of cereal bars!! That’s all you need to cycle the length of the River Thames. Well a sat  – nav or at least a map would also help in attempting to locate the source of the Thames. After driving up and down the same B-road in Gloucestershire we finally found a Public House which told us of the secret path to the Source. We should have just asked Sian!

This was beginning to take on the mystery of an Indiana Jones movie!! Equipped with a photo of a map hanging on the wall of the pub (it was suggested to take the actual map off the wall, but a photo had to suffice) we began our trek to the source. We set off on foot and walked through some fields, crossed a railway and there it was. The reason we had trained for 9 months, the source our forefathers had told us about. The Source of the Thames was all we had imagined, it was………… a rock in a field. “Don’t worry boys it’s bigger in London”

Time for lycra. We set off and our first town we were heading for was Ewen. We started off in some light drizzle but it didn’t dampen our spirits as this is what we had trained for all year. We’d even taken part in some warm weather training last year in Denia just to prepare us for this challenge!

Taking part in the ride were Kailam Davies (domestique), Liam Parsons (sprinter), Brandon Jones (puncheur), Callum Hodges (climber) and Joe Owen (roleur). Mr Lucas and Jim Phillips (super Domestiques) Mr Murphy followed us in the car and helped us out with directions. Mr Burns (soigneur) drove ahead of us and cycled back to meet us.

After Ewen we followed signs to South Cerney, Cricklade, Blundsdon, Shrivenham, Longcot, Fernham, Shellingford and Hatford. The boys did incredibly well. We rode in a peloton and there was brilliant communication between the boys. The weather improved and was sunny and warm. We cycled through some beautiful villages, decorated by Cotswold stone which were all cycle friendly. We eventually finished day one in Charney Basset after 35miles of cycling. There were a few climbs along the way which everyone handled really well. 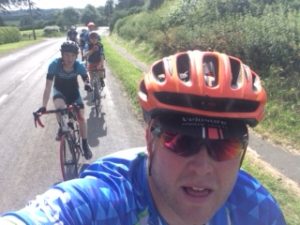 We drove to Abbingdon for our accommodation and Jack was there to greet us! Decided to have dinner in Oxford and Mr Burns new of a nice Ghurka restaurant. So we popped details into sat nav (expecting a half hour drive) and it was 0.8 miles away. We were never staying in Abbingdon, we were in Oxford and the Yeti restaurant was 5 minutes away!!! Lovely grub and some of the boys had curry for the first time!

Second day we started our ride in Henley. The women’s regatta was being held there that week so it was very busy and was all being set up, so there was an exciting buzz around the place. We began our ride at the rowing club and headed along the Thames towpath. This was going to be an off-road day. We cycled along a grassy path and admired the enormous houses along the route. The Thames was now beginning to show what a great expanse it really is. We had started with a stone in a field, then throughout day one we were crossing the river, but it was small and running through small villages, under village bridges and snaking through fields. Now it was lined with mansions and there were speedboats and parked at the end of jetty’s. This is where the rich and famous live: Mick Jagger and Elton John are just some of the inhabitants alongside the Thames. We cycled to Hurley and had to cross the river with our bikes on our shoulders, we passed through locks and appreciated the yachts and prettiness of the quaint settlements along the river. We stopped for lunch in Marlow and the end was in sight. The final stretch from Marlow through Taplow was the most challenging. We cycled through long grass, dusty dry mud and plenty of stingy nettles. It was very hot and we had to dismount constantly to pass through the many gates along the route.

We cycled passed Eton college and finished our ride in Windsor! Well done everyone. What a brilliant ride. The boys attitude, motivation and determination was impressive throughout.

We ended the adventure with pizza in Soho. We then walked to Waterloo bridge to see the iconic views of the Houses of Parliament, Big Ben and the London Eye. From the small rock in Thames Head to the mighty River Thames in London, this was an amazing experience. Well done everyone.