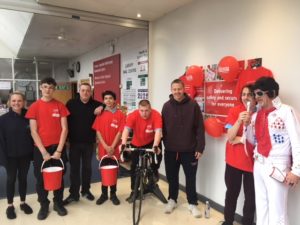 As part of Byte Night the following young people took part in a charity 100 mile bike ride on a static bike at Royal Mail on Penarth Road.

The pupils were Iestyn Harris, Will Clarke, Casey Jones and Liam Parsons. The boys alongside staff from the Royal Mail raised a super £360 for Action for Children. 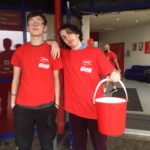 Well done all. It was boiling hot in the foyer of Royal Mail and the boys took it in turns to ride the static bike. When they weren’t on the bikes they were shaking their buckets and asking for donations. They even had a donation from Wales and Scarlets flanker James Davies.

Proud to be representing Headlands and Team Spokes!!!