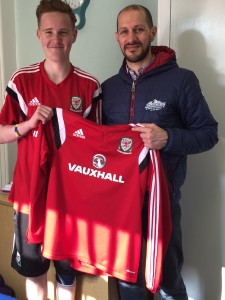 We are pleased to report that one of our pupils has been selected to represent Wales in the National Football Under 19s Learning Disability squad.

Four young people from Headlands School recently participated in the Wales  Squad Trials at the Sport Wales National Centre, Sophia Gardens, Cardiff. The initial trial took place over a full day and involved a rigorous assessment of players’ skill levels and  their ability to perform in competitive game situations. The level of skill and talent on show at the trial was immense.

All boys performed excellently at the trial demonstrating a great attitude and skill level and providing a great showcase for the level of talent here at Headlands School. Two pupils were awarded a place each on the squad (although one decided not to proceed), while one narrowly missed out on the opportunity.

We are very proud to pass on our congratulations to George Archer, who went on to perform outstandingly at the second trial and successfully gain his place in the National Squad. Over the course of the championships, George will be involved in three international fixtures against Scotland, England and Ireland. We wish him and the team the best of luck!