RiKaSysTemz is a small fitness business in Barry, South Wales. Each year owners Jordan and Craig Jones, hold a RiKaShaKe fundraising event on or around Halloween. Their aim is to raise money for charities that benefit and support children. This year they have chosen Headlands School, Action for Children. Elisha Allen-Cope (The schools’ Drama Teacher), has been taking part in the fundraising events each year with RiKaSysTemz and this year she has been helping them create and develop the event at Headlands School. 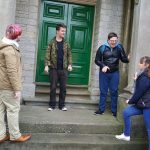 RiKaSysTemz have created a short film based on Michael Jacksons’ “Thriller” movie. They have been working with Elisha to script write and film on site at Headlands. The Drama students have also been working hard making their costumes and playing different characters within the film. Post 16 & KeyStage 4 Drama students, George Archer, Geraint Jones, Gethin Jones, Corey Pitman, Eliot Houghton, Luc Pearce, James Cook and Jacob Boylan, are the main characters in the film. Jordan and Craig have also been choreographing the Thriller Dance routine at their centre, using their RiKaShaKe trampolines, with the members of RiKaSysTemz. The members will be performing the routine live at Headlands School on the 22nd October 2017. The scenes filmed with the Headlands pupils along with the Dance piece will be combined to make the final film.

The film will go live online with the aim of raising money for Headlands’ Schools Drama and Music department. So far they’ve already raised £100.