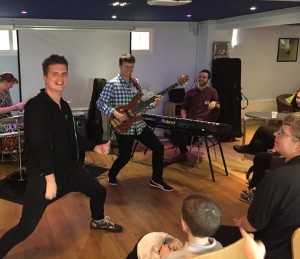 Live Music Now Wales and Headlands School have been working in partnership with some of our young people on a “Vision & Voice” project, funded by Ffilm Cymru and Awards 4 All.

Live Music Now musicians Dan Walsh (vocals/banjo) and John Nicholas (vocals/guitar), and film maker Matt Beere from Chapter Arts Centre, Cardiff have been working with pupils from the school over the past three months, teaching them literacy in music, songwriting and film making skills.

The pupils have worked together to create two new songs of their own, and two music videos to accompany them, giving an insight into their world, thoughts and dreams. As part of the project pupils were also treated to performances from two other LMN ensembles in different musical genres – Olivia Gomez (Mezzo) and Ben Pinnow (pianist) from the classical world, and Katie’s All Sorts Trio from the jazz world as well as live performances from Dan and John themselves during workshops, covering folk/rock genres. The project has enabled pupils to build self confidence and focus on working as a team,  emotional literacy and communication competences, as well as practical skills in songwriting and film making to aid their chances of future success beyond school.

The songs and music videos created by the pupils will be screened alongside a special behind the scenes documentary of the project, made by those involved, at Chapter Arts Centre on Monday 8th February.

Some of our pupils have shown that they could indeed be stars in the making, and have thoroughly enjoyed the experience!