Learning from the past for the future

Home / News / Learning from the past for the future 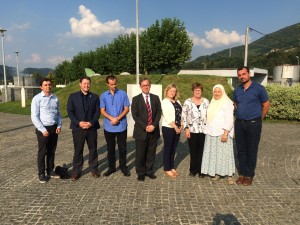 Headlands teacher Joe Lucas recently visited Srebrenica in Bosnia as part of a delegation committed to the Remembering Srebrenica project which seeks to commemorate those lost in the 1995 ethnic cleansing massacre and to educate future generations about the consequences of hatred.

In 1995 Bosnia was in the middle of a civil war following its declaration of independence after the disintegration of Yugoslavia. Bosnian Serb forces laid siege to the nation’s capital Sarajevo in their bid to control the country and embarked on a policy of ethnic cleansing in Serb-dominated areas. This resulted in many Bosnian Muslims in the region heading to Srebrenica because it was designated a safe area by the UN.  But, in July 1995, Dutch peacekeepers failed to stop Serb forces moving into the area. The Serb forces began systematically separating women and children from the men and later killed over 8000 male Muslims in the worst act of genocide in Europe since the Second World War

During the visit, the delegation; made up of David Melding AM, Newport West AM Jayne Bryant, Joyce Watson who represents the Mid and West region and Joe Lucas learned the importance of showing more tolerance towards different cultures and how to help others in need around the world.

The delegation also went to the memorial site in Potocari, where David Melding laid a commemorative wreath. Speaking about the visit, David said, “There are very real lessons for us to take from what happened here in Srebrenica.” Joe Lucas added,

“The main lesson is we must live with our neighbours not next to them. We must teach the young people we work with to resist hatred.”

In particular, the delegates heard from Nedzad Avdic who was 17 years old during the massacre and managed to survive after being taken for dead by Serb forces. He still lives there and spoke of his anguish.

“I was hit on my right side and in my hand but I was left for dead. Later soldiers left us and by accident I survived. I live here in Srebrenica as I returned 12 years after the war. Almost every day I visit here (the memorial) and when I see many of my neighbours, relatives and friends with their names on the stones, it’s very very difficult for me.”   Nedzad Avdic

As part of the project, a Wales-specific information pack will now be available to all schools in Wales in a bid to raise awareness of events in Bosnia over 20 years ago. David Melding, who was behind the idea, explained, “The pack has been produced so that we can promote knowledge of the conflict in Wales but then stress how important it is to work for peace and tolerance and just societies.”

More information about the project can be found on the website, www.srebrenica.org.uk.

(Photo shows the delegation during their visit)