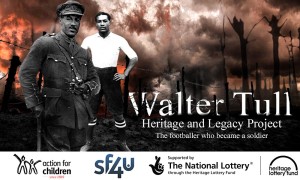 We are pleased to announce that Headlands School drama and dance students will be taking part in a live performance of the play “Walter Tull” on the 11th December.  Walter Tull was an English professional footballer who played for Tottenham Hotspur and became the first black combat soldier in the British Army during WW1.  Walter spent his childhood in National Children’s Homes and so it is fitting for our pupils to be able to pay tribute in this way.

Our Chief Executive, Tony Hawkhead, said: “Walter Tull’s story of achievement and bravery is an inspiration to us today. I’m proud that Action for Children played such an important role in nurturing Walter Tull as a child; Stephenson’s example of working in the service of children still guides us today. This project will bring Tull’s story to young people and inspire them to achieve great things.”

The drama group has been working hard for the last few weeks preparing for the show and exploring the life of Walter Tull.  Directed by Phil Vasili , the performance will be supported by Elisha Cope (HLTA) and music and sound is the responsibility of Post-16 pupiol, Gethin Jones.