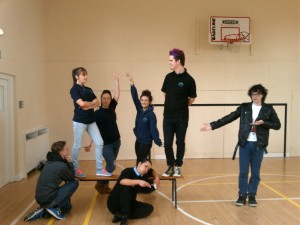 bers of the Headlands drama group are currently working very hard on their next big live performance, which will be staged in the summer.  Those involved will be performing part of the routine at Ebbw Vale’s dance festival in May and the complete and final performance will be held at the Penarth Paget Rooms theatre in June. We are keeping the exact details secret, but we will be publishing full information nearer to the time.

Pupils and staff are not only  working hard on rehearsals, but also fundraising to raise money for the stage set and costumes.  Events have included car-washing, sponsored walks and a non-uniform disco.

The production is being managed by HLTA Elisha Cope (director and choreographer), and Teacher David Gillingham (planning and stage management).