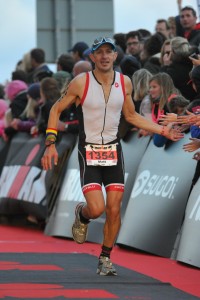 IRONMAN Wales is now well established as having one of the most challenging bike and run courses on the IRONMAN calendar, comprising of a gruelling 2.4 miles swim, 112 miles bike ride and 26.2 miles run.

Around 2000 competitors took part and Mr Burns completed this race coming in 314th overall, and 68th in his category achieving the following times 1 hr 9 mins for his swim, 6 hrs 39 mins for his bike ride and 4 hrs 8 mins for his run.

Mr Burns raised money to support young people at Headlands  in activities outside of school and has set up a triathlon club to encourage pupils to take part in swimming ,cycling and running challenges.

Mr Burns has also inspired staff and pupils to compete in a number of events such as the Cardiff Triathlon and the Cardiff Half Marathon.

Student, Joe Jones has also been inspired to compete in Iron Man Wales 2016 and has also successfully completed the Cardiff Triathlon, finishing in the top ten of his age group.