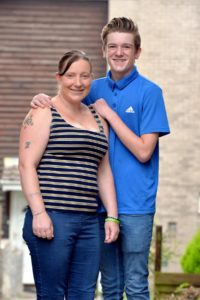 The single mum said she woke up being taken into an ambulance, complaining that her ribs hurt.

Paramedics told her that her heart had stopped for two-and-a-half minutes and son Brandon successfully performed CPR, causing slight bruising on her ribs.

Brandon said: “It was absolutely terrifying having to do that to my mum.

“I was so scared in case I did something wrong. That’s her life.

“But it just happened and I kicked myself into mode.

“She had two seizures – I brought her out of the first one just by chatting to her and making sure she knew I’m there and she’s safe.

“But after that she still was slurring words and couldn’t speak to me.

“I noticed her breathing wasn’t right too – normally she’ll just feel tired after a fit.”

That’s when Brandon called the ambulance, and Miss Jones had her second fit which he couldn’t bring her out of.

Paramedics told him to monitor her breathing, but the breaths were so far apart that he was told to give his mum CPR before the second breath.

“It is all a blur. I just remember them counting with me on the phone. One, two, three, four.”

The teen give his mum chest compressions for two to three minutes.

“I was shocked that it was Brandon who took it upon himself to do it,” Miss Jones said.

“My children are all first aid trained in case of situations like this, but I thought it would have been my daughter, Jem,” Miss Jones said.

“She’s amazing and really confident, but reacting in the moment is so different to practicing on dummies,” she added.

Brandon’s siblings were not in the room when it happened, but were in the corridor crying and panicking because they didn’t know what was happening.

“I woke up again in the resuscitation centre naked – they had to cut my clothes off. I was there for about eight hours,” Miss Jones said.

“Brandon visited the next day and it wasn’t until then that we were able to speak.

“He told me that it was terrifying having to try and save his mum’s life.

“I’m so proud of him. I was worrying the whole time I was in hospital, it must have been so difficult.

“I just want other people to be aware of epilepsy. There is a chance sufferers won’t pull out of it. My son saved my life and I cannot express how grateful I am.”

Brandon echoed his mum’s message. He said: “People don’t realise the risks of epilepsy but children should be taught CPR – it could save lives.

“I’m over the moon that my mum is here and well.”