Action for Children’s local Community Fundraiser, Nina Rice, held a ‘Thanks to You’ event for supporters on Thursday 12th July at Headlands School. 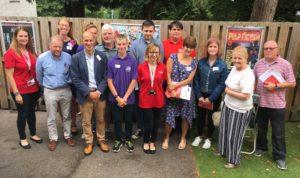 Fourteen supporters attended to hear more about the work of Action for Children nationally and locally and thoroughly enjoyed hearing more about the work of Action for Children’s Cardiff Blue Programme from Service Co-Ordinator Lee Bridgeman, and Headlands School from Principal Matthew Burns along with former student Tom Wade, and current pupils George and Joe who were the absolute highlight of the morning. Along with supporters from the Methodist Church were two members of Dow Corning staff who have recently donated £3,000 towards Headlands music room fundraising, along with former Headlands member of staff Judith Lanning, and former student Robert Lewis with his mum Julie.