“I was heading towards school when Tom Waters (p16 & Gelert West)  was returning from feeding the rabbit and we  spotted a gentleman on the hill that had fallen causing his dog to bolt down the road.

Tom immediately went into action stopping oncoming traffic and making chase on foot in his wellies which he had just worn to the animal enclosure, Tom continued chasing the dog for one and a half miles eventually catching him near Tesco ( I did try and keep up with Tom but with his determination even in wellies Tom used his previous cross country running experience well and outran myself). 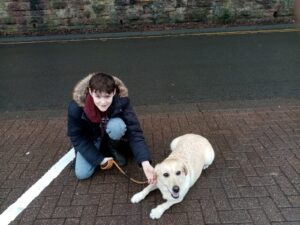 Tulip the dog is now back with her owners, she didn’t want to get in the car. The lad and yourself were very kind, I had quite a fall and was in shock at the time, the lad did very well to run all that way in his wellington boots, I think it must have been a mile and a half, so pleasing to see care like that in the community, well done Headlands school, thanks once again.